The Portfolio Committee on Home Affairs has questioned why there is no political will to implement the regulations as more problems surrounding Covid-19 testing beset the Lebombo border post in Mpumalanga.

The committee conducted an oversight visit on Thursday following the chaotic scenes that unfolded at various borders posts, including Beitbridge and Lebombo, at the start of January.

During the oversight visit to the border post that connects South Africa and Mozambique, delays in the processing of travellers were observed.

This despite the fact there was not a lot of travellers trying to enter into South Africa. Travellers waiting to be tested for Covid-19 at the testing area at the Lebombo border post. (Alex Mitchley, News24)

Several frustrated South Africans and Mozambicans with work permits told the committee they have been waiting to cross into South Africa for almost two days.

The hold up, they said, was at the Covid-19 testing area, where travellers needed to do a rapid antigen test before being allowed to enter, if the test was negative.

One traveller said she had been waiting for hours in the queue, where physical distancing was not being practiced or enforced.

Another complained there were problems with the speed points to pay for the tests by bank card, and had to now make a plan for cash.

“People have been here for two or three days. We are waiting to be tested but there is no testing going on, the lines are stagnant.”

Travellers also complained about the filthy bathrooms, the fact that there was no sanitiser and physical distancing.

“I am worried that I will get Covid-19 in this line,” one traveller said. 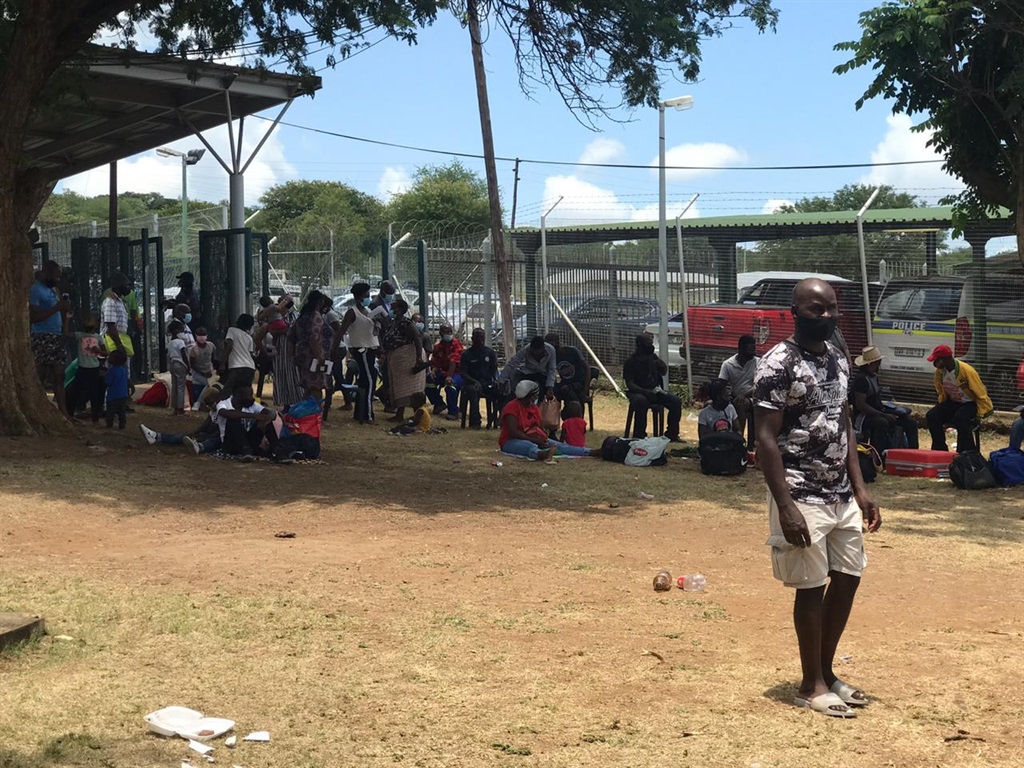 Travellers waiting to be tested for Covid-19 at the testing area at the Lebombo border post. (Alex Mitchley, News24)

EFF committee member Mgcini Tshwaku questioned why physical distancing was not being enforced, why there were delays and if the travellers have been given access to food and water while being made to wait in the hot Mpumalanga sun.

A port health official told the committee it was private laboratories doing the testing and they were responsible for processing and payment issues.

At the testing area, where a number of families with children and infants were waiting to be tested, the committee found there were only two people conducting the tests for the National Health Laboratory Service.

One health worker told the committee there was two other service providers contracted to do the testing, but they did not pitch up at the border post on Thursday.

He added Home Affairs Minister Aaron Motsoaledi would have to take responsibility for the situation and he would be called to account before the committee.

Bongo said it was clear there was no political will to execute Covid-19 regulations and the Border Management Authority Act.

He added political will was needed from the executive to ensure the implementation of the act and Disaster Management Act regulations at border posts.

Bongo was unhappy to find a group of Mozambicans, looking to visit South Africa, sitting around the border post on the South African side.

He asked officials why the group had not been escorted back to Mozambican border side, saying the matter should be attended to with urgency as the group was not physical distancing.

The committee also pointed out that many people being processed were either not wearing their masks or not doing so properly.

According to immigration services, 2 154 people arriving and departing South Africa had been processed at Lebombo between 1 and 6 January.