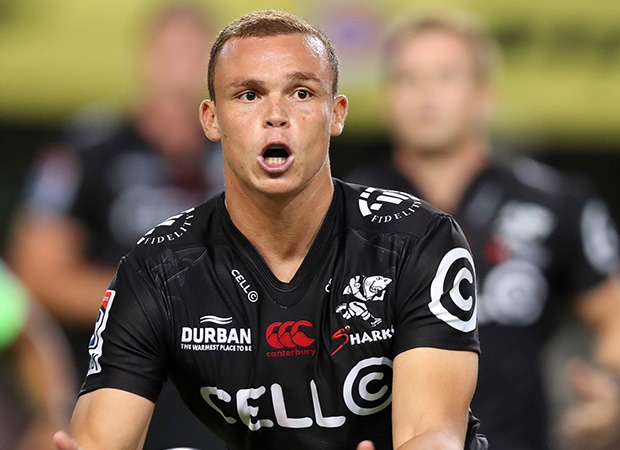 Flyhalf Curwin Bosch earned resounding praise from his coach Sean Everitt for marshalling the Sharks troops well under pressure from the Cheetahs in Durban on Friday night.

The Sharks won a tightly contested game 19-13, with Bosch scoring 14 of the home side’s points and Madosh Tambwe coming on to score a crucial try at the death.

The Cheetahs fought fire with fire and returned Bosch’s aerial bombs with a hail of up and under kicks of their own.

Although he skewed the odd one, Bosch won the kicking duel and was flawless from the tee.

“When you have a flyhalf like Curwin, the team looks at him for direction and to control the play,” said Everitt.

“Tonight (Friday), in these difficult conditions, I think he did an excellent job and that’s why he got man-of-the-match.

“His kicking was pin-point. I don’t want to take anything from the wings – Werner Kok, Yaw Penxe and Madosh Tambwe – their chases put the Cheetahs under pressure.

“Unfortunately, from one of those chases we had a try disallowed and rightfully so. But Curwin is playing with a lot of confidence.

“And when we get our contestable kicks right we are a very difficult team to play against.”

The defeat was the Cheetahs’ first of the Super Rugby Unlocked competition but it left them desperately hanging on for a chance at major honours after they would feel they lost two points when their clash against the Lions was cancelled.

The Sharks, however, are a team on the mend after their humiliating loss to the Bulls two weeks ago.

Bosch has been at the centre of everything they have done well so far, including kicking all their conversions in their 42-19 win over the Pumas last weekend.

Although the Springbok has a devastating counterattacking game, which has been largely hidden thus far, Everitt reckoned that he was playing what’s in front of him and doing so expertly.

“We play according to what’s given in front of us,” Everitt said.

“The Cheetahs had good line speed, they put him under pressure and I think he won that battle. It was all about go-forward and momentum when it comes to the nine and 10.

“The Cheetahs often defended really well, so we didn’t often get on the front foot with our carries, which made it very difficult for the 10.

“Curwin has got his kicking game to counteract that and I thought he did a pretty good job.”