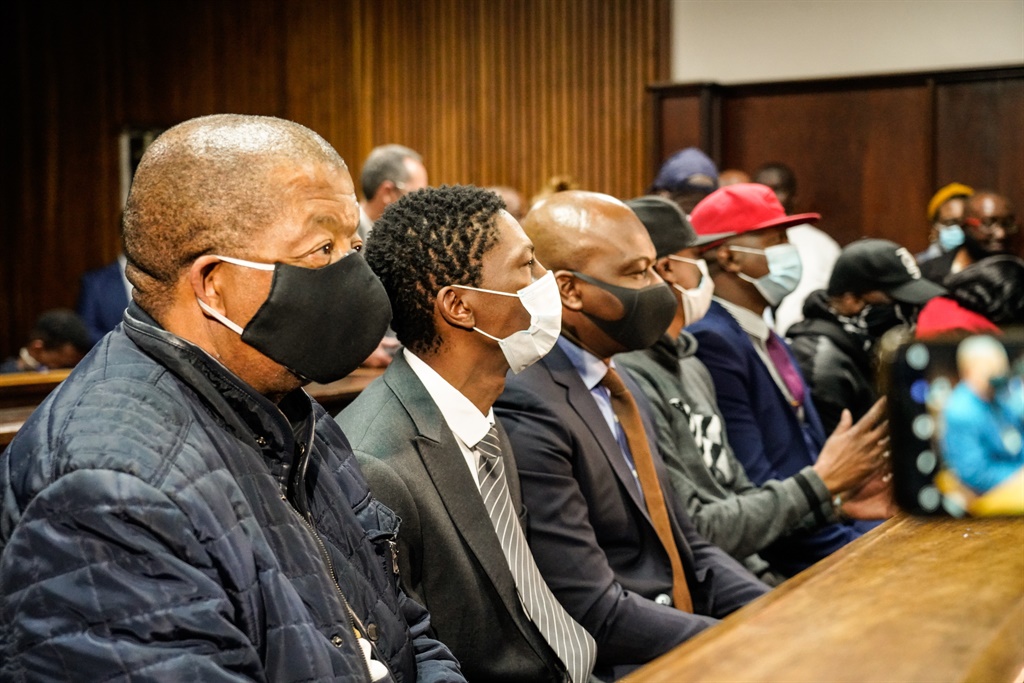 The seven accused in the controversial asbestos contract case seated at the dock in the Bloemfontein High Court.

ANC secretary-general Ace Magashule is right about what he calls “Hollywood cop arrests”, where the media tag along to high-profile arrests, writes Paul Hoffman.

It is rare for Ace Magashule, ANC secretary-general, to get it right on any topic relating to the accountability element of the rule of law. His aversion to what he calls “Hollywood cop arrests” by the Hawks is, however, right on the money.

The state in SA must respect, protect, promote and fulfil the rights guaranteed to all in our Bill of Rights, which is chapter two of the Constitution of SA, our supreme law. Among the rights that enjoy this status are rights to dignity, privacy, a fair trial and, once accused, to the benefits of the right against self-incrimination.

The last of these rights is widely misinterpreted in the ranks of the ANC. It is used to cling to power when under a cloud of suspicion of wrongdoing. Far better for all involved is to accept a precautionary suspension until the cloud dissipates or bursts on those suspected of malfeasance or misfeasance.

It is not necessary to prove criminality beyond any reasonable doubt to incur adverse consequences for bringing the ANC, the government, the public administration or indeed an employer in the private sector into disrepute.

A whiff of wrongdoing ought to be enough for those suspected to accept precautionary suspension as an opportunity to dispel the suspicion. This is where the presidential spokesperson finds herself at present.

Some of the arrests effected by the Hawks in recent days have been accompanied by a media contingent with cameras, microphones, recording equipment and breathless reporters anxious for a scoop.

This practice is called a “media ride along arrest” in the US, where similar rights to those mentioned above are available to the citizenry. The practice has had the attention of the Supreme Court, which is the equivalent of our Constitutional Court.

Should the practice be challenged in the courts of SA, it is likely that reliance will be placed on what has been decided about Hollywood cop style arrests in the US.

READ | Adriaan Basson: Ace Magashule is not Jacob Zuma and we are not stupid

The term “media ride along arrests” is used as a neutral descriptor of what Magashule calls “Hollywood cop arrests”, as seen on local television news channels in recent days.

In 1999, a unanimous US Supreme Court Bench held that police violated the Fourth Amendment of the US Constitution when they allowed members of the news media to ride along with them while executing search and arrest warrants.

The court also held police were entitled to qualified immunity from money damages for violations occurring before this ruling.

The US Supreme Court also held that the First Amendment to the US Constitution bestows no right on the media to accompany the police on operations.

It dealt with this point tersely:

Surely the possibility of good public relations is simply not enough, standing alone, to justify the ride along intrusion into a private home. And even the need for accurate reporting on police issues in general bears no direct relation to the constitutional justification for the police to go into a home in order to execute a felony arrest warrant.

The First Amendment of the US Constitution protects freedom of speech and freedom of the press, among other things. The Fourth Amendment protects people from unreasonable searches and seizures by the government.

The Fourth Amendment, however, is not a guarantee against all searches and seizures, but only those that are deemed unreasonable under the law.

The Constitution of SA is much younger than that of the US and has more detailed provisions for the protection of human rights in the type of situation in which those arrested in the full glare of media publicity find themselves embarrassed, hiding under hoodies and coats and generally subjected to unwanted attention.

It must be remembered that an arrest follows a decision to prosecute and a decision to prosecute is made on the basis that a prima facie case has been established by the police in the docket to which the case relates. All of that is a far cry from a conviction in a criminal trial, in which proof beyond a reasonable doubt has to be adduced by the State to the satisfaction of the court hearing the charges brought against the person arrested pursuant to a warrant of arrest issued by the prosecuting authority.

The Hawks will do well to remember that one of the reasons put forward for closing down the Scorpions was their predilection for showy arrests, searches and seizures, such as were carried out against Zuma, at the time a private citizen running for a leadership position in the ANC.

So far it has not come to the point in SA where an arrest with all of the fanfare of a media ride along has been challenged for its lack of constitutionality. The US Constitution was interpreted and the Supreme Court ruled finally on such a challenge more than 200 years after that Constitution came into effect.

The Hawks should learn from the experience of their colleagues in the US and pay attention to what Magashule is saying about the ill-effects of highly publicised arrests. It is likely that, if asked, our courts will follow the precedent set in the US.

– Paul Hoffman SC is a director of Accountability Now